From lithography prints to objects

“Theatrum Scientiarum” is a project striving for an interdisciplinary discourse between art and science. For this purpose, conference participations (including the publication of a paper), the initialization of talk rounds and later an art project are realized. Subject is the problem of an apparent rapprochement between technological and biological concept sphere, the analysis of this rapprochement and the research for possible origins.

In relation to the historical concept of the cabinets and wonder chambers popular in the early modern times, graphical objects have been made. The traditional technique of lithography was the starting point of this artistic work, supplemented by etching, drawing and cutout. Together these objects form groups differenced in “Papierate” and “Strukturalien”. They build some sort of room installation.

In addition to the artworks' aesthetic claim, the results of the theoretical discourse of the interdisciplinary work were fixed in an accompanying volume.

The project was sponsored by scholarship from 1st Jan. 2011 to 30th Jul. 2011 by the Arts Foundation of Saxony- Anhalt. In relation to the conditions of the scholarship, the presentation of the results will take place in an exhibition at the end of the year. 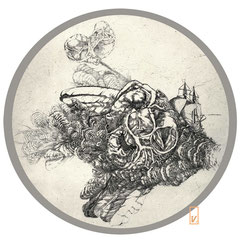 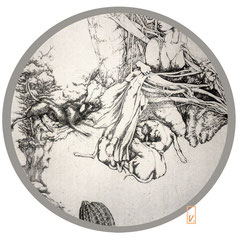 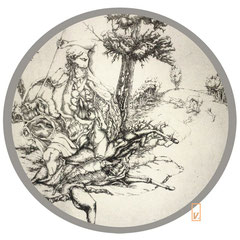 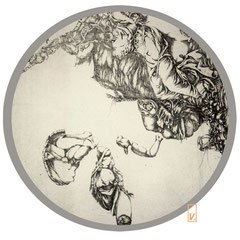 The print series “Post Mortem” follows the structure of Johann Friedrich Reichardts melodrama “Ino” (1791). That is why the series consists of eleven etchings and case scenes, respectively.

The "Ino" is a quite unknown composition of the Hallenser musician Reichardt. This is mainly caused by its unusual structure. The composition combines in a virtuoso way music and text or song without fixing them together. They stand abreast commenting each other.

The compartmentation of the individual elements activates the discussion with the pieces. This approach of keeping the own valency of the different genres of art leads to the construction of a graphic sound piece accompanied which text. It is a play with fragments leaving gaps to the spectators perception behind.

The different levels of reception are connected by the dramatic plot of the composition and escort the observer by listening to the music and watching the pictures. The arising dissonances between text, picture and music can be interpreted as blankspace or associative rooms.

These is reflected once more in the compositional design of the graphics which consist of complex symbol systems of historical and temporary quotations. In the combination of these systematical symbols and the underlying plot of the melodrama the controversy of the work develops, namely the complex relation of past and presence and its effect on the development of ourself conception. Against common manners the combination of picture, sound, and text does not follow the intention of harmonizing the elements, as in silent movies for example.

The deliberately created disharmony generates an incommodious feeling while dealing with the art work. However, this may be unpleasant, but is not of disadvantage. It generates the possibility to create awareness of the different artistic forms of expression and their effects on the observer without projecting them into each other from the beginning. With respect to these disharmonies, the observer receives an active role, by bearing a relation to those parts.Incidentally it becomes clear that the use of musical composition does not conduce the reinforcements of emotions or that dramatizing the story holds its eigenvalue. By this process of perception, which the spectator gained by viewing, listening and reading, his own active role within the arts will become accessible for the spectator himself. 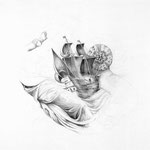 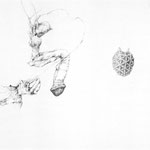 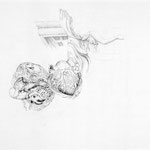